The music of the Darmstadt School:
An Introduction 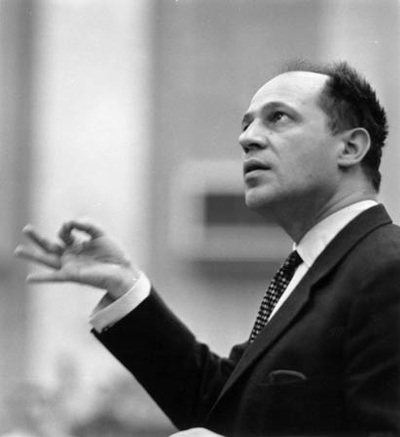 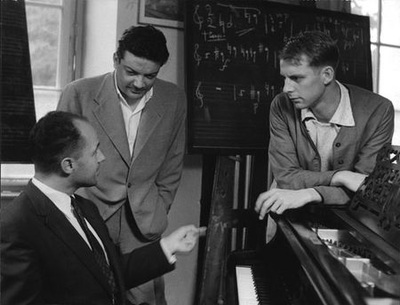 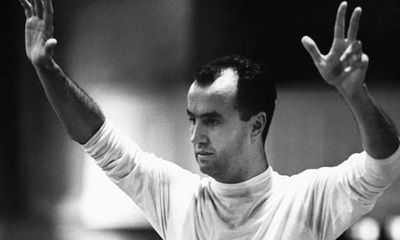 The Darmstadt School refers to a loose grouping of composers associated with the International Summer Courses for New Music in Darmstadt, West Germany beginning in the early 1950s.

The summer courses at Darmstadt were founded in 1946 with the intention of rebuilding German musical culture on an international basis in response to the nationalistic and narrow-minded attacks on modern music in Third Reich. At first, the programs were dominated by older composers whose music had been suppressed by the Nazis, such as Arnold Schoenberg, Igor Stravinsky, and Bela Bartok. But beginning around 1950, the concerts and workshops began to feature the works of a younger generation. It was these composers, who were born in the 1920s and came of age amid the destruction of World War II, who would constitute what came to be known as the "Darmstadt School."

Like many such groupings and "schools" in art history, the idea of the Darmstadt School grew from journalistic usage, and some historians have criticized the term for suggesting a greater uniformity of style among composers than actually existed. The historian Martin Iddon has argued that by the time the idea of the Darmstadt School emerged in the late 1950s, the group had already begun to splinter apart. Nonetheless, Darmstadt has come to signify meanings beyond the historical particulars of the summer courses, and become all but synonymous with the musical avant-garde in Europe after the Second World War.

This music of the Darmstadt School was a product of the post-apocalyptic mood shared by many young Europeans in the years after 1945. The German philosopher Theodor Adorno, who was a regular attendee at Darmstadt, famously declared that "to write poetry after Auschwitz is barbaric," suggesting that the validity of art itself could no longer be taken for granted in the face of an event such as the Holocaust. Germans spoke of the "zero hour" (Stunde null), the sense that time had begun again-- a feeling at once liberating and full of terror. In France, the existential philosophy of Jean-Paul Sartre and Albert Camus sought to justify human life in a world without God or any inherent meaning whatsoever.

Some works were direct responses to the horrors of war: Luigi Nono's Il canto sospeso (The suspended song), a haunting composition for chorus and orchestra, sets the letters of resistance fighters condemned to die in German camps. But the trauma of history also manifests in more subtle ways: Karlheinz Stockhausen claimed that he avoided a regular beat in his music because he forever associated it with the Nazi march music that played incessantly during the war. Although much of the music that came out of Darmstadt is dark and unsettling, there are also notes of exhilaration and hope-- the feeling that the catastrophe of war had created the possibility of a new beginning for human civilization.

In technical terms, the composers of the Darmstadt school shared a fundamental orientation in a technique known as serialism. Serialism was seen as the basis for a new, international musical language capable of replacing common-practice tonality, which many composers felt to be obsolete.

In essence, serialism was an elaboration of the twelve-tone technique developed in the 1920s and '30s by Austrian composer Arnold Schoenberg and his two pupils, Alban Berg and Anton Webern. Whereas Schoenberg and his pupils had sought to integrate the twelve-tone technique with the compositional genres of the classical tradition-- sonata, fugue, rondo, and the like-- the the composers of the Darmstadt School looked for more radical applications. Often doing away with conventional aspects such as motives, melodies, and even basic forms of repetition, they tried to invent a constantly evolving, self-renewing musical language.

Although many discussions of serialism foreground the technical analysis of the music, such an approach has arguably done this repertoire more harm than good. More important than the details of the serial technique are the expressive purposes to which it was put. If the music at first sounds uniformly dissonant and chaotic, with practice one learns to distinguish between the distinct voices of the Darmstadt composers.

Stockhausen wrote of feeling that he was "part of a new epoch: and that an epoch which had started hundreds of years ago, even 2,500 years ago with the way of thinking of the ancient Greeks, had finished during the last war." And indeed, for many listeners, this music appears completely divorced from the classical music tradition. The music of the Darmstadt School is among the most challenging in the European classical tradition, for performers and listeners alike. For most listeners, what stands out is usually the harsh dissonance of the music, its atomized textures, and its sudden oscillation between violent eruptions and unnerving stillness.

But in spite of its radical qualities, upon closer familiarity this music reveals many connections to earlier sounds and styles. Italian composers such as Maderna and Nono shared a predilection for vocal music and a lyrical touch that could be related to the musical traditions of their home country. Stockhausen's music contains echos of the expressionism of the early 20th century. Boulez revered the music of Debussy, and the link to impressionism is easy to hear inpieces such as the shimmering Le marteau sans maitre. In these and other works, the classical tradition is reflected as though through a distorting mirror, a relationship to the past that, for the composers of the Darmstadt School, held true to the historical trauma of the mid-20th century.